It’s a warm, sunny afternoon and a small group of men and women stand in line under the covered walkway of the River Oaks Community Center chatting and laughing. In spite of the 94-degree weather, there’s an air of excitement as the clock ticks down to the start of Tarrant Area Food Bank’s monthly Garden on the Go distribution of fresh fruits and vegetables.

For $5 each, families and individuals are able to purchase bags filled with a wide variety of seasonal produce. Tarrant Area Food Bank purchases all of the produce for the program wholesale and provides it to community members for about half the cost. The rest of the cost is underwritten by grants from Costco Wholesale and the PepsiCo Foundation.

Garden on the Go was launched in 2014 as a way to serve communities with limited access to healthy food. When the only supermarket in River Oaks closed in December 2015, accessing fresh fruits and vegetables became more difficult for many patrons of River Oaks Community Center.

“A lot of these people are elderly and they don’t drive out of River Oaks,” said L.C. Route, custodial manager for the community center. “Going to the grocery store is out of reach for them,” he said.

During a typical Garden on the Go distribution at River Oaks Community Center, it’s not uncommon to see men and women packing their cars and trucks with several brightly colored Garden on the Go bags, which were purchased through a grant from Yum! Brands Foundation, Inc. Route often helps customers carry the heavy green and white bags to their cars. “A lot of them will come and buy several bags to last them for the month,” he said. In addition to purchasing bags of produce for themselves, many people also purchase additional bags to deliver to friends and family members. “This is a tight-knit community,” said Route. “Everybody knows everybody.” 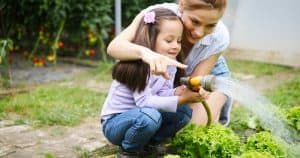 Dan Chisolm, a retired police chief for the River Oaks Police Department, said many people come to the community center, and Garden on the Go, for the fellowship. “I think it’s a wonderful program. There’s certainly a need and desire for it,” said Chisholm. When his friends are unable to make it to Garden on the Go because of health issues or other reasons, Chisolm said he often purchases extra bags to deliver to them. “For the price, you can’t beat it,” he said.

Shirley Wheat, co-director of River Oaks Community Center, said Garden on the Go has been a big help to the community. Wheat said that when it comes to grocery shopping, many of the residents face challenges such as not having access to a vehicle, not being able to drive due to health conditions, and raising grandchildren on limited incomes. “A lot of them need it (Garden on the Go) desperately,” she said.

“Garden on the Go is much higher quality produce than I can buy at the store,” said Jim Gordon, a River Oaks resident. Gordon said he has been coming to Garden on the Go at the community center since it started at that location in 2014.

On this particular day, the Garden on the Go bags were filled with acorn squash, tomatoes, onions, potatoes, plantains, avocados, oranges, lemons, limes, grapefruit and apples. Wheat said that when she finds out what produce will be in the Garden on the Go bags for an upcoming distribution, she often prepares handouts with recipes for a particular fruit or vegetable.

“If It Just Helps One Person”

In addition to Garden on the Go, the River Oaks Community Center hosts a TAFB Senior Share program, which provides seniors with nutritious groceries and tips on health and wellness. Throughout the month the community center also holds other activities, including low-impact exercise classes, sewing classes, games, and “Thursday Night Live,” an evening of live music and dancing.

Wheat said many people have shared with her that the community center has been key to helping them stay active and keep a positive attitude even in the midst of difficult circumstances. At the end of the day, said Wheat, “even though you may not have a lot, you have enough to sustain you.”

Wheat and co-director Shirley Bloomfield grew up together in River Oaks and founded the community center in 2007. At the heart of it all, said Wheat, is meeting the basic needs in the community. “If it just helps one person, it’s worth it all.”

If you are interested in learning more about Garden on the Go or possible sponsorship opportunities, email Barbara Ewen at barbara.ewen@tafb.org.

Read the stories of families in our commmunity and people supporting our mission. Check out the latest issue of our quarterly newsletter, Feedback.